Impersonator is encouraging recipients to donate to charity or sign up for voucher program (U.S. Virgin Islands)- Attorney General Denise George wants the public to beware of scammers sending text messages attempting to impersonate her with a fake Twitter account.

The fraudulent messages in the name of Attorney General George, encourage some of the recipients to donate to a charity and notify others about a voucher program that they may be eligible for. The V.I. Dept. of Justice (VIDOJ) was made aware of the Twitter account that claims to be managed by the V.I. Attorney General. The account presesently has severalfollowers.

AG George is urging everyone to remain skeptical when receiving random messages, whether by Twitter, email, or otherwise. Text messages from unknown sources may offer hyperlinks to other sites and is one way scammers can install malware on your mobile electronic device, putting you at increased risk for identity theft and financial exploitation. Examples of the fraudulent Twitter messages sent from the account are below. The recipient’s information has been redacted to maintain privacy. 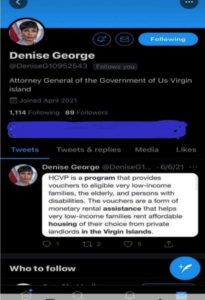 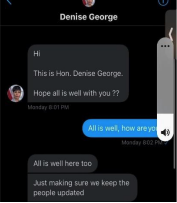 The fake account in Attorney General George’s name attempts to solicit charitable donations. “Unfortunately, scammers take advantage of goodwill and generosity by creating fictitious charitable organizations, seeking fraudulent donations by taking money which could otherwise go to those in need. The initial communication could come in any form- letter, phone call, email or text message. No matter the form, the goal is the same: to get personal or business information and steal money.

I encourage anyone who receives these suspicious messages to delete it, “said AG George. AG George further reminds everyone to disregard texts asking for the verification of personal data, including Medicare or Medicaid information, in exchange for receiving economic stimulus funds or other benefits from the government. Government agencies or officials are not sending out emails asking for residents’ personal information to receive funds.

She said If you receive a text or email from any source claiming to come from a government agency or employee with an attachment or link asking you to open it or click on it, do not do it until you verify it is authentic. If you have any information on the fake Twitter account please call Department of Justice at 340- 774-5666 ext. 10351. For information regarding SCAM prevention, assistance, and up-to-date tips, please visit: • The Department of Licensing and Consumer Affairs consumerawareness@dlca.vi.gov