ST. THOMAS, U.S.V.I. – Today, Attorney General for the U.S. Virgin Islands Denise N. George announced a settlement with Jeffrey E. Epstein’s estate, co-defendants Darren K. Indyke and Richard D. Kahn (Co-executors of the estate), and ten Epstein-created entities. The settlement resolves a law enforcement action filed in 2020 under the anti-criminal enterprise, sex trafficking, child exploitation and fraud laws of the Virgin Islands. The settlement only resolves the claims against the Estate and the co-defendants named in the Government’s lawsuit, noted Attorney General George.

Under the terms of the settlement, the defendants will pay the Government of the Virgin Islands $105 million in cash plus one half of the proceeds from the sale of Little St. James, the island on which Epstein resided and on which many of his crimes occurred. The total cash value of the settlement will increase once the island is sold. The Estate also agreed to pay $450,000 to remediate environmental damage around Great St. James, another Epstein-owned island, where the Government found that Epstein razed the remains of centuries’-old historical structures of enslaved workers to make room for his development. Total cash payments will be made over a definite time period of no more than one year.

The Attorney General brought civil enforcement claims against the Epstein estate under the Virgin Islands’ Criminally Influenced and Corrupt Organizations Act (CICO), the Territory’s RICO analog. CICO and the Virgin Islands Uniform Prevention of and Remedies for Human Trafficking Act’s prohibitions of sex trafficking and sexual servitude are among the strongest in the United States.

That is our solemn responsibility as a government, separate and independent of any claims filed by individual survivors.”

The settlement also will return to the Virgin Islands more than $80 million in economic development tax benefits that Epstein and his co-defendants fraudulently obtained to fuel his criminal enterprise. The Government alleged that Southern Trust Company, an Epstein company, made fraudulent misrepresentations to the Virgin Islands Economic Development Authority regarding its qualifications for EDC tax benefits. Southern Trust fraudulently induced the EDC to provide such tax credits having relied upon the false representations.

The Virgin Islands alleged the co-defendants conspired with Epstein in carrying out an expansive criminal enterprise, the “Epstein Enterprise,” through which dozens of young women and children were trafficked, raped, sexually assaulted, and held captive in the Virgin Islands at Epstein’s secluded private island, Little St. James. Participants in the Epstein Enterprise used deception, fraud, and coercion to entice and lure vulnerable girls and young women into human sex trafficking with promises to help them and their families pay for school, health care, or other financial needs. Epstein, along with other associates, used property and companies in the Virgin Islands to carry out and conceal his scheme.

Under the Settlement agreement, the Estate will sell Little St. James and Great St. James to independent third parties to fund its settlements, terminating Epstein’s ownership of property in the Virgin Islands and ensuring that the islands cannot be used for illicit purposes by those associated with Epstein. The Estate has also agreed to wind down its business operations in the U.S. Virgin Islands and to provide documents to assist the Government’s ongoing investigations

The settlement terms require that the Government dedicate the proceeds from the sale of Little St. James exclusively to a trust created by the Government of the U.S. Virgin Islands to fund projects, services, counseling programs, organizations and activities that help Virgin Islands residents or inhabitants who are victims of sexual assault, human trafficking, sexual misconduct, and child sexual abuse. In addition, according to the terms of the agreement, a portion of the settlement proceeds shall be directed by the Government to the credit of the Department of Justice and placed in a special fund for costs and expenses of its operations, investigations and prosecution of crimes, civil enforcement of violations of Virgin Islands law and any other matter under the jurisdiction of the Attorney General of the U.S. Virgin Islands.

Throughout its investigation and litigation, the Government has worked to bring to light the conduct of Epstein and his enablers and co-conspirators and to preserve and protect compensation for victims and assure victims’ rights. The Attorney General’s Office placed CICO Criminal Activity Liens on various accounts related to Jeffrey Epstein to ensure the Estate did not improperly dispose of or dissipate assets that were required to satisfy the Government’s claims on behalf of the people of the Virgin Islands and the claims of Epstein’s victims. Regarding victims’ rights under Virgin Islands law as a priority, the Government, at the commencement of its action, promptly intervened in the initial victim compensation fund proposed by the Estate, as it included broad releases that were not in the best interest of the victims, did not protect their confidentiality, and did not have independent fund administrators to act on their behalf throughout the process. Through the Government’s intervention, an experienced advocate was retained to assist victims in navigating the process and provide informed assistance to the fund administrators. Said Attorney General George, “I am pleased that earlier this year, the fund and its independent administrator awarded nearly $125 million to approximately 150 women abused by Epstein, satisfying all of the victims’ claims under the compensation program.”

Attorney General George emphasized the Government’s gratitude for the cooperation of brave women who survived Epstein’s abuse and were willing to share their own personal experiences to assist the Government’s ongoing investigation, and their counsel who have advocated fiercely for their clients. The Government also acknowledged the assistance of other individuals and entities that provided information. Said Attorney General George: “At the very start of the case, I was so honored to have met with three very courageous young women who were trafficked and sexually exploited on Little St. James by Jeffrey Epstein, in my St. Thomas office, where I listened to their chilling and horrific experiences at the hands of Epstein and his associates. Our work has been inspired, humbled, and fortified by the strength and courage of all of those who survivedEpstein’s abuse. I am grateful to Epstein’s survivors and their attorneys for their cooperation throughout the investigation.” “We owe it to those who were so profoundly hurt to make changes that will help avoid the next set of victims. Through this settlement, and with their help, we will turn millions of dollars towards education, victim advocacy and support, and law enforcement,” added Attorney General George.

Attorney General George acknowledged the dedicated work of her extraordinary team of attorneys for their relentless dedication and outstanding work in what is believed to be the largest monetary settlement in the history of the Virgin Islands: from the Virgin Islands Department of Justice — Chief Deputy Attorney General Carol Thomas-Jacobs, Civil Division Chief Attorney Ariel Smith, Solicitor General Pamela Tepper — and additionally, the law firm of Motley Rice. She also expressed gratitude to Governor Albert Bryan, who appointed her in 2019, for his commitment to ensure that justice was done. Attorney General George also expressed her appreciation for the cooperation of the New York Department of Financial Services.

Attorney General George took office in May 2019 A native Virgin Islander, Attorney George served as an Assistant Attorney General and trial attorney in the criminal, civil, family, juvenile, white collar and public corruption divisions of the Virgin Islands Department of Justice for more than 18 years. During her tenure, she successfully prosecuted a full spectrum of violent crimes, including murder, manslaughter, rape, domestic violence, sexual assault, and child abuse. As a member of the Child Abuse Task Force, she co-authored the Virgin Islands’ first criminal child abuse and neglect statute. In the Civil Division, she represented the Government of the Virgin Islands in civil lawsuits filed against and on behalf of the government. She served also as the Director of the White Collar Crime and Corruption Division as its lead prosecutor for over 13 years.

The suit is Government of the United States Virgin Islands v. Estate of Jeffrey E. Epstein, et al in the Superior Court of the Virgin Islands Division of St. Thomas and St. John. Read the amended complaint filed on Feb. 12, 2021. 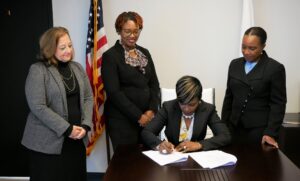 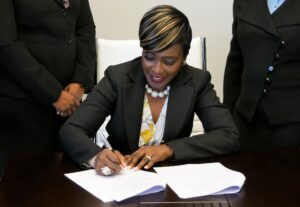